Last week, I told you about how a bipartisan group of legislators, both past and present, banded together to send a letter to Hydro-Quebec, requesting that they stop exploiting a loophole in Maine’s election law to funnel millions into a flashy PR campaign to sway Maine voters.

Well, Hydro-Quebec has responded with a promise to continue pumping as much money as it takes into this race to greenwash CMP’s terrible project with ongoing “information efforts.” As a reminder, Hydro-Quebec, solely owned by the Canadian government, stands to make $12.4 billion in profit, and they’ve already spent more than $6 million on an aggressive ad campaign against our effort.

And in a bizarre twist, they wrote, “Hydro-Quebec’s campaign efforts are not aimed at influencing upcoming elections”

As Representative Kent Ackley said on WVOM last week, if the role was reversed, this sort of spending would be illegal in Quebec. Listen to his full interview here.

The fact that Hydro-Quebec has refused to be accountable before Maine’s regulatory bodies, and the Legislature, about the source of the power is also troubling. Further, when the Legislature considered a bill to shed light on Hydro-Quebec’s shell game, CMP flew in 30 lawyers to kill the bill. Why are they so scared of Mainers discovering the truth behind their “clean energy corridor”?

Sue Ely, a staff attorney at the Natural Resources Council of Maine, explains why the environmental community nearly universally agrees that this project is a bad deal for Maine. She says, “There is zero reliable evidence that the project would result in an actual, verifiable reduction in global greenhouse gas emissions. That’s right. Zero.”

Please, take the time to read and share this column, which sheds light on just how sketchy this project really is.

Also this week, activists Darryl Wood and Rick Bennett participated in a discussion about the referendum on Conserving The Maine Outdoors with David and Mike. This show, geared towards the membership of the Sportsman’s Alliance of Maine, divided the hour-long show into two segments to allow each side equal time to inform their membership. Darryl and Rick served our cause incredibly well, so please join us in thanking them for taking the time to have this important discussion.

We would also like to thank Representative Janice Cooper and Jennifer Poirier, a candidate from Skowhegan, for their vocal support of the No CMP Corridor referendum.

Action Items of the Week

Last week, we asked for volunteers to step forward to serve as sign distribution coordinators once our yard signs are printed. We had a great volume of responses, but would like to extend this ask for one more week. Are you willing to help the campaign in this capacity?

Sign up this to learn more about becoming a distributor by clicking below!

Also this week, we need our activists to contact the Governor’s Economic Recovery Committee, because it appears that they are using the ongoing pandemic as an excuse for expedient permitting for CMP’s corridor ahead of our November vote. The people of Maine will decide on the fate of this project this November, and any attempt to push a backdoor approval is unacceptable. 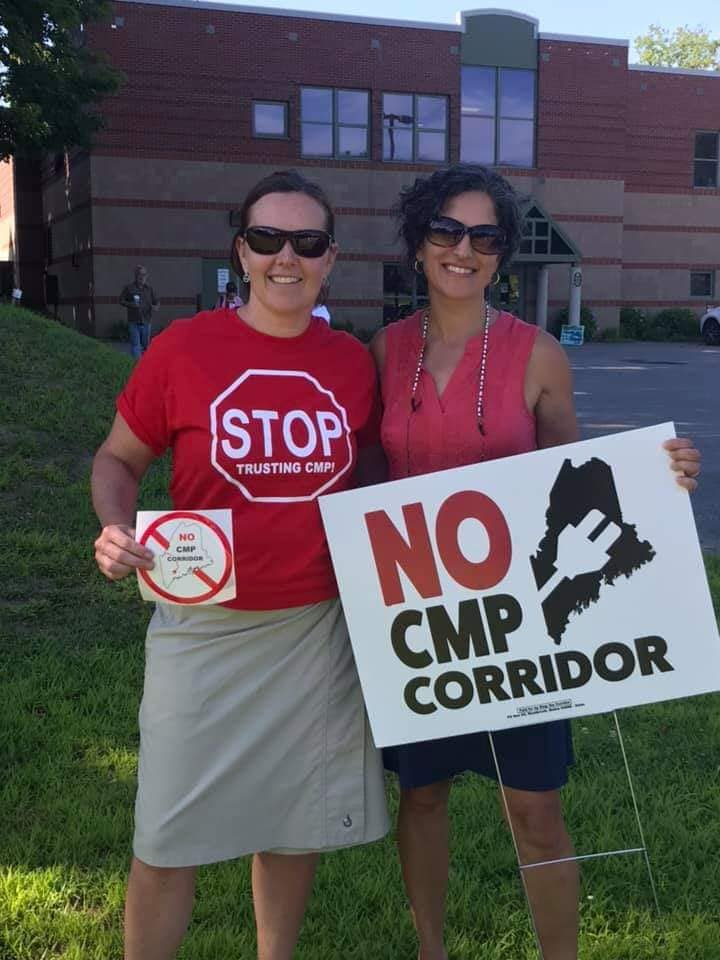 This week, No CMP Corridor would like to recognize the hard work and dedication of Elizabeth Carruso of Caratunk. As First Selectman for the Town of Caratunk and a Registered Maine Guide, Elizabeth understands firsthand just what is at stake if CMP is successful in forcing this extension cord for Hydro-Quebec and Massachusetts through western Maine. She represented Caratunk as an intervenor at the PUC, DEP, and LUPC proceedings. In addition, she has been a powerful voice and advocate for our cause at county commissioner meetings, legislative hearings, media interviews, and was recently featured as a panelist NRCM's July 2020 webinar. She has been a steadfast liaison between the grassroots effort, municipal and state leaders, and NRCM. Elizabeth was the recipient of the 2019 NRCM Conservation Leadership Award. She was a dedicated signature gatherer, and continues to be a valued spokesperson for our referendum.
As always, we welcome any financial support you’re able to contribute. At this point, every dollar really does count! Please feel free to donate securely below or mail a check to No CMP Corridor PAC at PO Box 471 Farmington, ME 04938.