This week, CMP took their case to prevent our referendum from moving forward to the next level with an appeal to the Maine Supreme Court. Considering the fact that, after spending $10 million on advertising, they are still 20 points behind, it isn't surprising that CMP's foreign stakeholders are willing to take this lawsuit as far as they can possibly go. They know that if the people of Maine are finally able to have a say on their for-profit corridor project, they will lose.

It's sad they will go so far to silence their own customers so they can make a profit.

But for CMP, a company owned by Iberdola of Spain, and Hydro-Quebec, a company owned by the Providence of Quebec, the only thing standing between them and billions of dollars in profit is this referendum. Sam May, a Wall Street analyst from Portland, hit the nail on the head with an op-ed this week where he said, “The transmission line will generate significant profits for CMP, Avangrid, and Iberdola, while leaving Maine a mess.”

Featured Op-ed of the Week:

Sam May: Take another look at Maine’s energy future

Richard Bennett, former chair of the Maine Republican Party, outlined in the Sun Journal (May 24) the brutal legal offensive unleashed by Central Maine Power and its U.S. parent, Avangrid. Bennett noted CMP “has filed suit against its customers to deny them the right for self-determination in a citizens’ initiative” and that this “is a shocking development in the CMP corridor debate.”

These outlandish actions are supported by its board of directors, including John Baldacci, former governor of Maine. Baldacci earns $200,000 per year as Avangrid’s vice chair while employed as senior adviser at Pierce Atwood, the lobbying firm. Last year CMP paid Pierce Atwood $3.2 million to represent CMP’s interests at the Maine Public Utilities Commission.

This may be business as usual, but it is not business in the interests of Mainers and our future.

This Thursday, July 9th from 12-1 pm, our partners over at the Natural Resources Council of Maine will host a Zoom meeting on this topic, “The CMP Corridor: Putting Profits over Maine People” featuring our very own Liz Caruso and Vaughn Woodruff. Together, they will dive into CMP and Hydro-Quebec’s Q3 spending reports, which are due on Monday. RSVPs are required, so be sure to register for the event today.

Action item of the week:

This week, we would like to urge each of you to fill out this brief questionnaire so we can feature your stories and why you oppose this project, on our social media. Also, please continue to hit back at CMP and Hydro-Quebec’s false advertisements with letters to your local editors. If you need help, just let us know!

And if you are able, would you consider signing up to donate monthly to our cause? Click below to donate or mail a check to No CMP Corridor PAC PO Box 471 Farmington, ME 04938.

Activist of the Week: 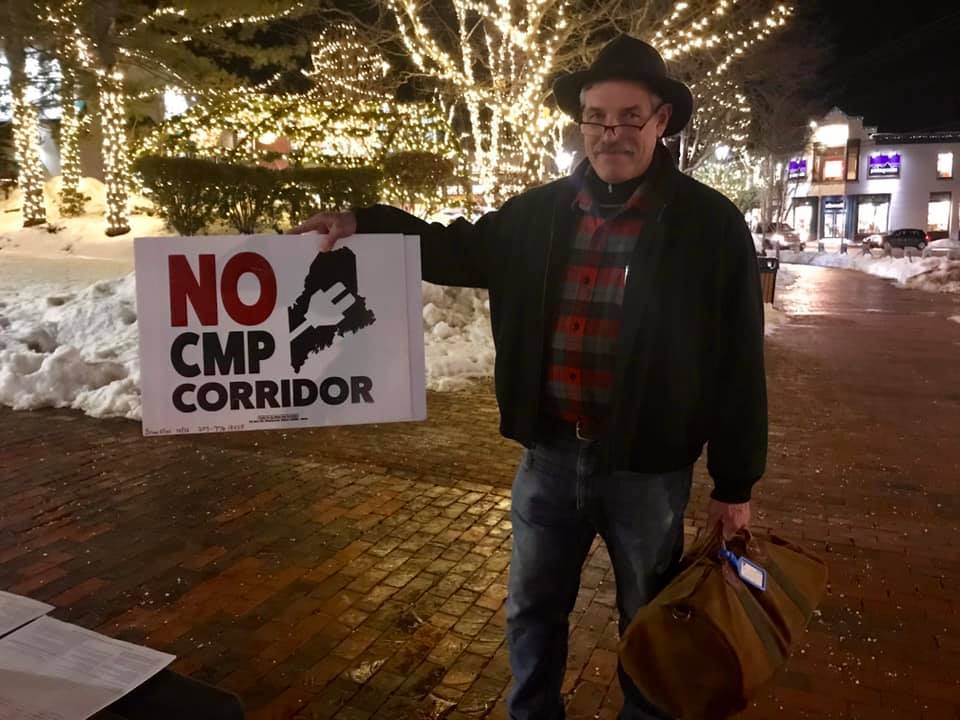 This week, we would like to recognize the hard work and dedication of activist Bob Haynes of Skowhegan. As the Coordinator of the Old Canada Scenic Byway, Bob served as an intervenor at the PUC, DEP and LUPC, and he has testified before legislative committees in Augusta. He's a constant contributor of personal donations, and was instrumental to our signature gathering efforts as a volunteer coordinator for the Skowhegan area. In addition to recruiting and managing volunteers, he also set up events from Skowhegan to Freeport and beyond, spending many hours outdoors collecting signatures on even the coldest winter days. Bob also played an important role in the petition certification process, bringing petitions to town offices all across Somerset County, and delivering them back to HQ in Farmington.

As a forester, Bob has put his knowledge and has been a tremendous asset to our cause with the many, many letters he has drafted to area papers.

There’s no question that Bob is a strong advocate for the protection of the western Maine woods.

Thanks to Bob, and to all of you, for your continued dedication to this important cause. Please consider a donation today to help us continue to stand our ground against CMP and Hydro-Quebec. As I’ve said before, while we don’t have foreign investors bankrolling our campaign, we have what they will never have - and that’s the will of the Maine people.