This week, reporter Steve Mistler uncovered that Hydro-Quebec has hired a second firm to track the effects of their PR blitz on public opinion here in Maine. This new contract will cost $329,000, in addition to the $6.2 million they’ve already spent on defeating our referendum this November. As a corporation owned solely by the government of Quebec, spending to influence voters of this country is usually illegal, but Hydro-Quebec found a loophole in Maine law and is exploiting it to the fullest to influence Maine voters on a project they stand to make a killing on (for more information, view this recent webinar from our partner, NRCM).

This foreign corporation, in conjunction with Spanish-owned CMP has spent record amounts of money in an effort to persuade Maine voters that their primary concern is the environment and our economy. Just last week, they announced a new “benefits” package, negotiated behind closed doors with Governor Mills, that would supposedly result in energy savings for Mainers.

But like everything else with this project so far, it’s nothing more than an empty promise designed to trick Mainers into supporting a bad deal. Luckily, real Mainers like Gary Henry of Winslow aren’t fooled by their propaganda. In his letter, Gary tells it like it is, “The only “green” in this profiteering plan are greenbacks, for foreigners, executives, and the political elite.”

Last week, Tom Saviello joined the George Hale Ric Tyler show on WVOM to discuss the details around this new package, which he equates to shuffling furniture around on the deck of the titanic. They know that this project is deeply unpopular, but they also know that the only thing standing between them and billions in profit is the voters of Maine. 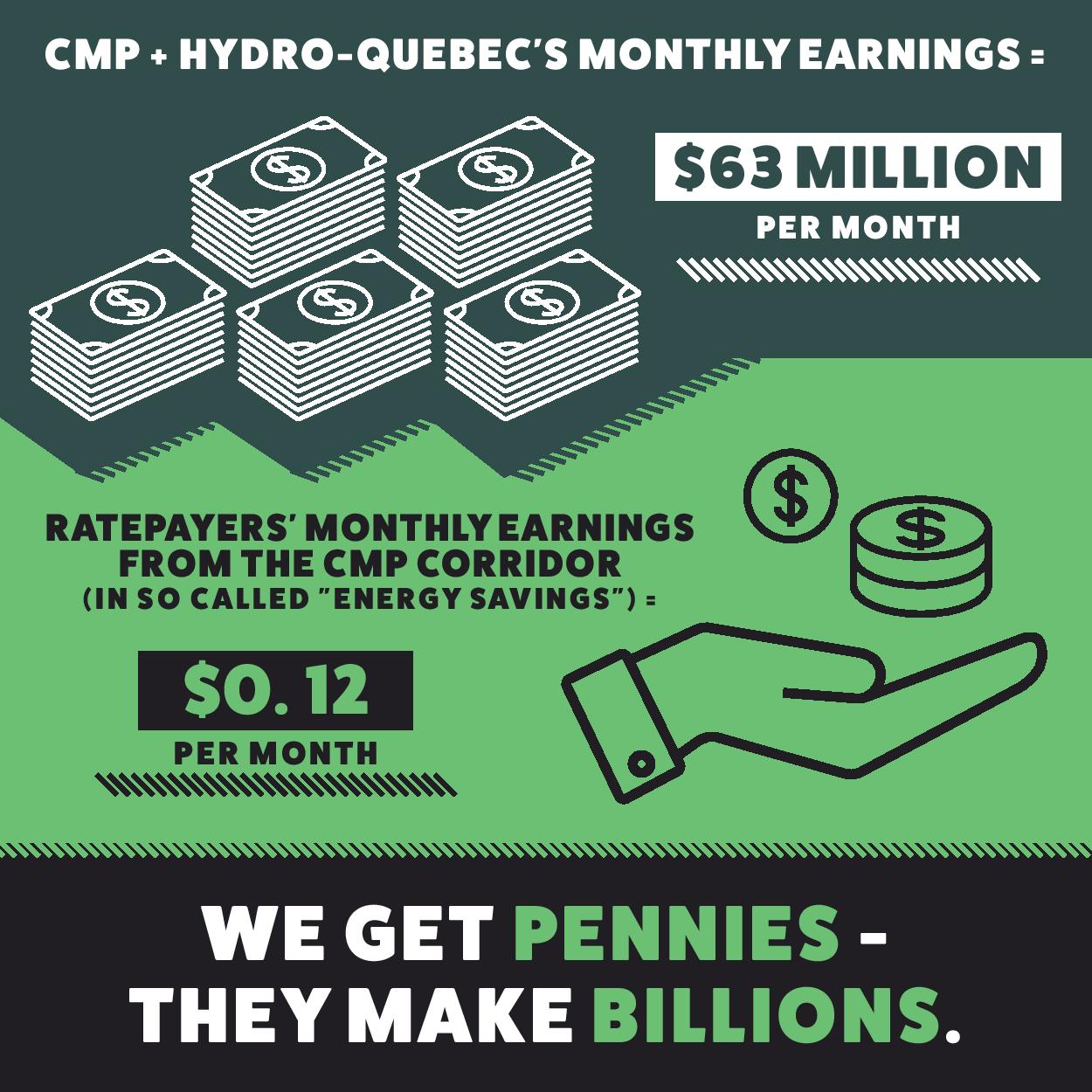 Also this week, John Nicholas of Winthrop posted a well written op-ed about CMP's so-called "sweetener" to this bad deal in for Mainers. Read the LTE here.

We will never be able to match the millions that CMP is spending on advertising their bad deal, but we do want to make sure we are successful in spreading the word about how bad this deal really is. Can you pitch in today with a donation to help us spread the word?

If so, please donate securely online below or send us a check at No CMP Corridor PO Box 471 Farmington, ME 04938.

Action Items of the Week

So this week, we ask that you help us spread the word about what a bad deal this is through 250 word letters to your local editors. CMP and Hydro-Quebec are spending an obscene amount of money to convince your friends and neighbors that this project is to protect our environment, bolster our economy and help us save on our energy bills. But of course, none of that is true, which is why we must spread the word that a “Yes” vote will end this terrible project this November. If you need help drafting your letter, please let me know!

We also would like further input on our new slogan so we can print the signs you’ve all been asking for! The level of feedback you all provided last week was terrific, which is why we’re now asking all of you to help us decide which logo to use going forward. See our various logo options below and please vote by clicking the button below that!

Activist of the Week

Last, but certainly not least, we would like to thank Melissa Letarte of New Sharon for serving as the primary volunteer notary at our headquarters in Farmington. Week after week, and whenever she was needed in between, Melissa was there, ready and willing to help. And that was no small feat, with volunteers like Karla Bock, Theresa York and Kate Weatherby bringing hundreds of petitions in for notarization at a time. Melissa went above and beyond our call for help, dedicating several hours each week to our cause.

We truly wouldn’t be where we are today without volunteer notaries like Melissa from all around the state; so thanks to all who helped in this critical way.

We WILL win this November!