This week was all too familiar in No CMP Corridor land - Maine made the news as the state with the worst power outages in the nation, CMP requested a 10% rate hike to compensate for its terrible service and the PUC is investigating the company’s mishandling of renewable projects.

Also this week, an independent Canadian report came to light that sheds serious doubt on Hydro-Quebec’s ability to export hydropower without backfilling from fossil fuel generators to service its local customer base. Opponents have always suspected that this would be the case, and since Hydro-Quebec failed to participate in any meaningful way during the permitting process, we were previously left to speculate. But now we know that Hydro-Quebec does not have the capacity it claims.

This quote box, pulled directly from the study, truly says it all:

The study also clearly states that export contracts will be a significant obstacle to electrifying the economy, and moving away from reliance on fossil fuels.

It’s no wonder Hydro-Quebec and CMP fought so hard to kill Senator Carson’s bill that would have studied the actual global impacts of this for-profit contract.

Please share this ad far and wide. Thank you for your advocacy, Steve!

Also this week, our grassroots volunteers were out in force with fantastic letters published in publications all across the state. These letters featured below are concise and hit on an array of important topics. Thank you to all who have taken the time to submit a letter!

Who do you trust?

By Darryl Wood of New Sharon

By Jillian Pelletier of Mechanic Falls

Property owners don’t want CMP to build near their backyard

By Kim Fischer of Greene

By Audra Hufnagle of Damariscotta

By Hallie Arno of Lincolnville 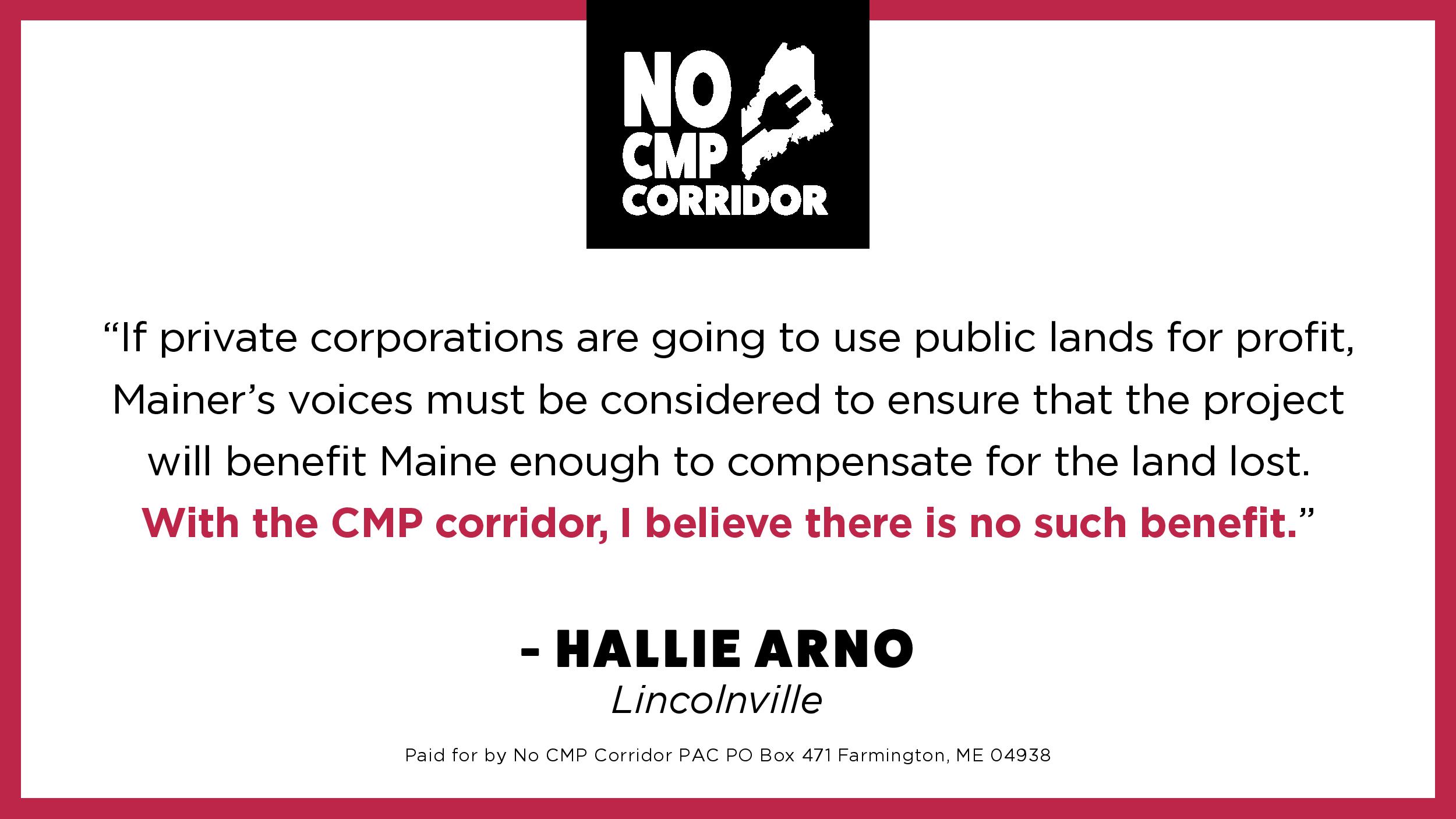 By Charlene Cummings of Phippsburg

Item #2: LETTERS - This week, we’re asking you to help us keep up our steady drumbeat in local and statewide publications. Please take a few minutes to put your thoughts down on paper. What’s your motivation to vote YES this November to reject the CMP Corridor? How do you feel about a foreign government spending tens of millions of dollars on propaganda to influence the outcome of this election? Do you think CMP should be allowed to circumvent the Maine Constitution? If you need help crafting a letter, but you’re willing to give it a try, email us now at [email protected]! You really can help us make a big difference in this way.

Item #3: PUBLIC COMMENT - Also this week, please continue to write to the administration to urge President Biden to put the Presidential Permit on hold until:

1) The public is allowed to weigh in

3) The First Nations in Canada and the Penobscot Nation in Maine are granted the government-to-government meeting that they are entitled to.

Quebec-Maine relations for mutual respect for our democratic institutions

This week, Senator Rick Bennett of Oxford made his case to the people of Quebec in a powerful column that was featured, in French, in LaPresse, a major publication in Canada. With this piece, he alerted our Canadian neighbors of the actions being carried out by their government-owned utility here in Maine. Thank you, Senator Bennett, for your efforts to correct this grave injustice.

Where: Register here for the Zoom meeting

Last week, the Natural Resources Council of Maine, Appalachian Mountain Club and Sierra Club urged the U.S. District Court in Boston to include the U.S. Department of Energy in their case to block the CMP Corridor based on the grounds of inadequate environmental review. The injunction that is in place today is the only thing standing between Segment 1 of the Corridor and CMP’s bulldozers. We are so incredibly grateful for their continued effort to seek justice, and for the ongoing construction delay resulting from their case. For those of you who haven’t seen it in person, Segment 1 is the heart of western Maine’s undeveloped forest. It’s the home to native brook trout, protected Canadian Lynx, Somerset County’s largest deer wintering yard and so much more. It’s a place that is unlike any other, and it’s absolutely critical that we continue to protect it from CMP’s corporate exploitation.

Thanks for your continued support! Together, WE WILL STOP THE CMP CORRIDOR!