Before I jump into bringing you up to speed on the MANY new developments, I would like to thank everyone who took time to participate in the process this week. We had a tremendous showing in Augusta (virtually), and our collective voices were heard loud and clear. I’ve often said that No CMP Corridor’s strength is the continued dedication of our grassroots members. This week was truly a testament to just how powerful everyday Mainers can be when they band together for one common cause.

On Monday, the Veterans and Legal Affairs Committee held a public hearing on three bills to limit foreign interference in Maine’s referendum elections. Foreign interference is explicitly illegal in the United States, but unfortunately Maine has not yet joined other states with a process in banning foreign governments from engaging in statewide referendum votes as well. That’s how Hydro-Quebec, a Crown Corporation owned 100 percent by the Province of Quebec, has gotten away with funneling record amounts into their PAC to persuade Maine voters to support their $12.4 billion contract to sell power to Massachusetts through Maine’s electrical grid.

Hydro-Quebec was absent during the permitting process, and has never answered questions about their power generation under oath. However, Sophie Brochu, President and CEO of Hydro-Quebec came out of hiding to testify in opposition of these important bills even though the spending campaign they’ve engaged in would not be allowed on their side of the border.

According to Brochu’s testimony, "When we have a referendum in Quebec, or in Canada, it's really a big thing, politically loaded, very heavy and the impacted can have politically-wise in the country." Evidently, our referendums aren't nearly as important in Maine because they are initiated by the people, not by lawmakers. She also argued that her company has the right to influence Maine voters.

Click the video below to view Brochu's testimony as well as our supporter Liz Caruso testifying in support of the bill.

It’s safe to say that we at No CMP Corridor strongly disagree with Ms. Brochu’s sentiments, and we’d like to thank those of you who submitted testimony in advance and those who presented during the hearing. As always, our grassroots members represented our side strongly, and the few who argued in favor of foreign government spending were all getting paid to be there.

Should Canadian Meddling Get a Pass?

On Wednesday, Superior Court Justice Murphy released a preliminary decision on the Black V. Cutko case, which is the public lands case. She determined that:

1) the Bureau’s interpretation that leases are not subject to the Constitutional requirement for a ⅔ vote is inaccurate, and that

2) CMP’s argument that a statute regarding the setting of poles that predates the constitutional amendment does not in fact trump the Maine Constitution.

On Thursday, the Agriculture, Conservation and Forestry heard Senator Russell Black’s Bill to enforce the Maine Constitution’s requirement for a ⅔ vote of the legislature for leases and sales that reduce or substantially alter the use of public lands. We believe strongly that the Bureau of Public Lands and CMP violated the Maine Constitution. So, that’s why we are tackling this question in the courts, the legislature, and at the ballot box. Once again, there was a great showing of volunteers who submitted testimony in support of this bill.

Here’s the link to review the testimony that was provided, and here’s a link to watch the full hearing on Youtube.

Bureau Director Andy Cutko made it clear to the Committee that the Bureau does not view the legislature as a partner in making important decisions regarding the use of our public lands. He also refused to answer a series of basic questions including:

During the same hearing, Mainers for Clean Energy Jobs spokesperson Ben Dudley admitted that the Maine State Chamber of Commerce is a pass through organization for CMP to fund their grassroots-posing group. It’s important to note that Mainers for Clean Energy Jobs has not filed as a non-profit, or as a PAC, so their spending is completely shielded from public view (THEY ARE DARK MONEY!).

At the same time as the ACF hearing on Thursday, the Board of Environmental Protection met to discuss the fate of CMP’s ‘minor revision’ application. While they declined to assume original jurisdiction for the minor revision, it is possible they may face the question of whether or not to take over original jurisdiction of the entire application in the future as part of the DEP permit appeal.

Other positive takeaways from the BEP meeting:

1. Our grassroots team filled the Zoom meeting once again, showing continued public pressure and scrutiny of any aspect of this project. The BEP is forced to look carefully at every change that CMP makes to its application.

2. Earlier this week, CMP withdrew two components of the minor revision and refilled them as application amendments. We learned at the meeting that the procedure for application amendments must involve public notification, and opportunity for public comment, a public hearing, and intervenor filings. These are the two amendments that will be addressed in the coming months:

3. Since the Army Corps based their permit review on the CMP's application to the DEP, it's possible these amendments will need to be considered at that level, too.

Here’s a link to our press release on the matter.

On Friday, our partners took to the airwaves with this exciting new ad! Click the screenshot below to view it!

Many thanks to Gary, Troy, Kate, Sheryl, Larry and Theresa for staring in the new TV ad. It takes a lot of gumption to put yourself out there in such a big way, and we appreciate it. Please share their new ad to help spread the word that the fight against the CMP Corridor is far from over. 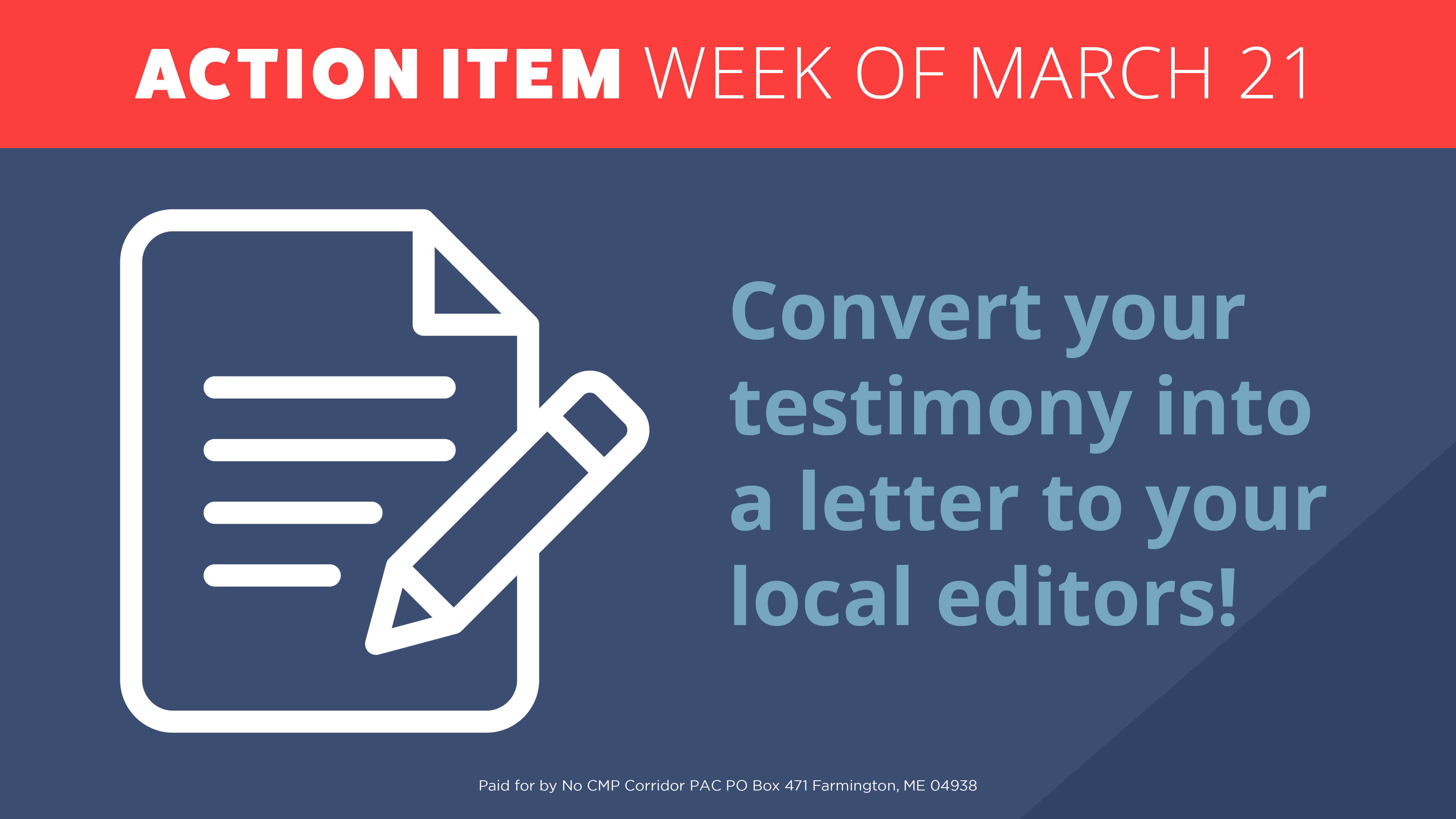 This week, we’re asking that those of you who submitted testimony last week take a few minutes to convert your comments into a letter to your local editors! You’ve already taken the most difficult step of putting your thoughts on paper, so this task shouldn’t take very long at all. If you’re interested, but you need help with this task, please email us at [email protected] and we will help you.

This week, we’re offering five No CMP Corridor bumper stickers for a suggested donation of $20. Donate now to get your stickers!

To stay up to date and receive text message alerts, text NOCMP to 474747.

If you'd like to join our echo chamber to share our social media posts at a moments notice, text ECHO to 474747.

Thank you all and please enjoy the rest of your weekend!