We have some great news! CMP had originally planned to begin clearing trees (by the Wisconsin company they contracted with to clear the corridor), but the start date has again been delayed.

As we told the media, to begin construction before all permits are in hand and the people of Maine have had a chance to vote on our referendum would be premature and callous.

Featured Story of the Week

According to a story in the Portland Press Herald, delays to this project will cost CMP millions of dollars that they won’t be able to push off onto the Massachusetts ratepayers or Hydro-Quebec, and “the project still faces hurdles, including from some towns along the corridor route and from a citizen referendum campaign that’s collecting signatures for a November 2021 vote to require legislative approval for high-voltage power lines.”

Featured Letter of the Week

CMP has spent years telling us that their unpopular and destructive NECEC corridor is a “done deal”, but as I recently wrote in a letter published by the Bangor Daily News, nothing could be further from the truth, which is likely the real reason behind CMP’s decision to delay clearing the corridor.

“Central Maine Power would like Mainers to think their destructive corridor through an undeveloped region of western Maine is a done deal, but that is simply not true. The Army Corps permit is under federal appeal because they did not conduct an Environmental Impact Statement like they did for similar hydropower projects in New Hampshire and Vermont. The Department of Energy permit has not yet been granted. CMP still has municipal permits to obtain and multiple towns have ordinances that would not allow the project as proposed.

“The Maine Department of Environmental Protection permit is under appeal. There also remains a lawsuit challenging the legality of the public lands lease that CMP obtained without the two-thirds approval of the Maine Legislature required by the Maine Constitution.”

And most importantly, Mainers are hitting the pavement in communities all around our beautiful state to finally give the people of Maine a chance to vote on a statewide ballot referendum to stop this project.

And that’s exactly what we’ve highlighted in our new television ad that has hit the airwaves all across the state! This ad will help raise awareness about our new referendum, and inform voters that they need to seek us out to sign (again) to bring this issue to a statewide vote.

Featured Activists of the Week

This week, we would like to express our gratitude to Linda, Monica, Theresa, Steve, Wendy, Darryl, Troy and Jean for their willingness to be featured in our new ad. They did an absolutely wonderful job, and we couldn’t be more pleased with the way it turned out. It takes a lot of courage to stand up to a foreign corporation in such a prominent way.

Now, let’s build off of their courage as we take this fight out into the field with a more assertive collection strategy. As we said in the volunteer Zoom call this week, it’s time to crank up the heat by meeting with voters wherever they happen to be, whether that be at doors, in parking lots or at events, so we can meet our goals and send CMP (and Hydro-Quebec) packing once and for all. 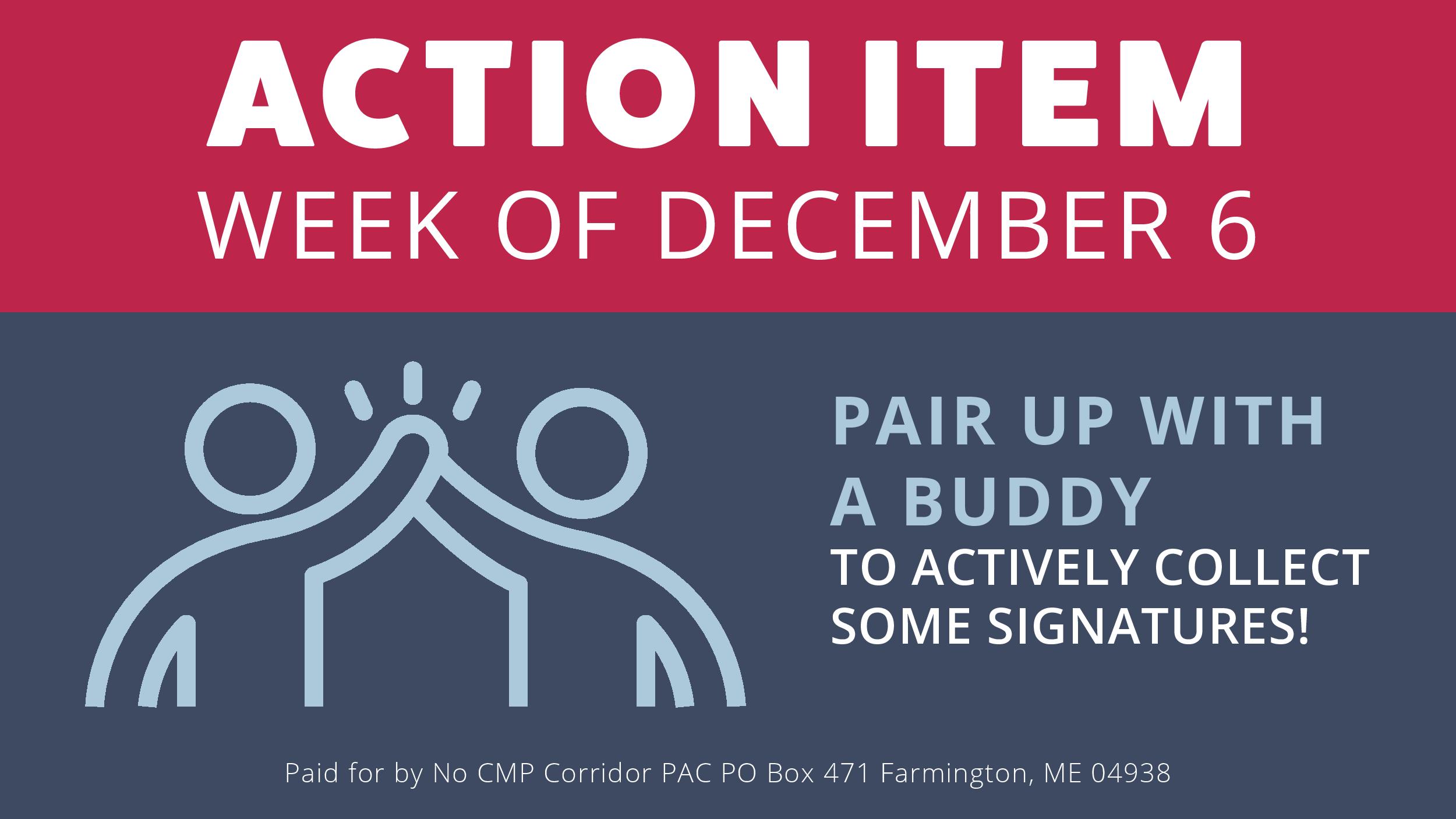 This week, we would encourage all of our signature gatherers to pair up with a buddy and make a plan to ditch your tables to actively collect, either out and about, or door-to-door in a community where we didn’t have adequate coverage on Election Day. If you need help devising a plan, shoot us an email at stopnecec@gmail.com, and we will help you in any way that we can! We have a lot of work left to do, but that doesn’t mean that we can’t make the most of this process, and have fun while we’re out there interacting with voters (in COVID-safe ways, of course).

Also, if you are still holding on to petitions from Election Day, please make a plan to have them notarized and returned to us this week, along with your completed affidavits.

And finally, if you haven’t yet signed the petition, visit the “Events” section of our website to find a signing location near you, or respond to this email, and we will help pair you up with a volunteer in your area to sign.

Thank you all, we are truly blessed to find ourselves in the company of so many dedicated and passionate Mainers. Together, if we continue to push forward together, we will be unstoppable.

To stay up to date and receive text message alerts, text NOCMP to 474747.